Navaratnalu scheme includes the nine assurances given by the Government of Andhra Pradesh in the form of nine large-scale welfare schemes. 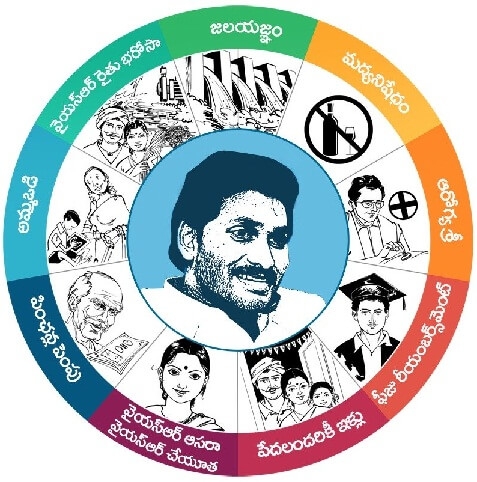 Details about the welfare scheme is provided below.

Besides, a price stabilization fund with an outlay of Rs 3,000 crores would be set up so that farmers can get the Minimum Support Price. A Calamity Relief Fund of Rs 2,000 crores will be set up for areas perennially hit by drought and floods.

Rhytu Bharosa scheme would be implemented from October 15 2019.

Details about the scheme is available here.

The education of the poorest of the poor will be funded by the government so that the students would be able to pursue their higher education dreams. Annually, Rs 15,000 will be given to students for their necessities.

Details about the scheme is available here.

The Arogyasri scheme would apply to all medical treatments of above Rs 1,000. Regardless of the location of the hospital, all medical expenses would be borne by the government.

Prohibition would be implemented in three phases. In the first phase, the government will reduce the number of liquor shops and create awareness through a mass media campaign. In the second phase, the rates will be increased so that liquor becomes unaffordable to the poor and the middle-class. In the third phase, alcohol will be made available only in Three and Five Star hotels.

Amma Vodi scheme provides financial assistance of INR 15,000 to families of school-going children in Andhra Pradesh. This is done to encourage the families to send their children to school.

Details about the scheme is provided here.

An amount of Rs 15000 crore would be allocated for the 89 lakh women in a co-operative society. The development of women and children in Rural Areas (DWCRA) Loan waiver will be implemented in four phases. Women would be given loans at Zero interest. The money would be deposited directly into the women’s accounts.

As many as 25 lakh houses will be constructed for the poor families in the state. Registrations will be done in the name of the women of the household. If the poor need money, they can mortgage their home with zero-interest loans.

The government of Andhra Pradesh as a part of its social safety net strategy introduced the YSR Pension Kanuka Scheme intending to ensure a secure and dignified life for all the poor. This scheme is meant to protect the most vulnerable sections of society.