The rising cost of living, inflation and life expectancy make retirement planning an essential part of today's life. As per the United Nations, the  World's life expectancy is expected to reach 75 years by 2050 from the present level of 65 years. Due to this, the number of post-retirement years increases. So, to provide social security to more citizens, the central and state governments have come up with various pension schemes to help its people.

Following are a list of various pension schemes that are provided by the State and Central government to its citizens.

Under the Atal Pension Yojana, there is guaranteed minimum monthly pension of Rs 1000 per month to Rs. 5000 per month, for the subscribers.

Atal Pension Yojana will be focussed on all citizens in the unorganised sector, who join the National Pension System (NPS) administered by the Pension Fund Regulatory and Development Authority (PFRDA). 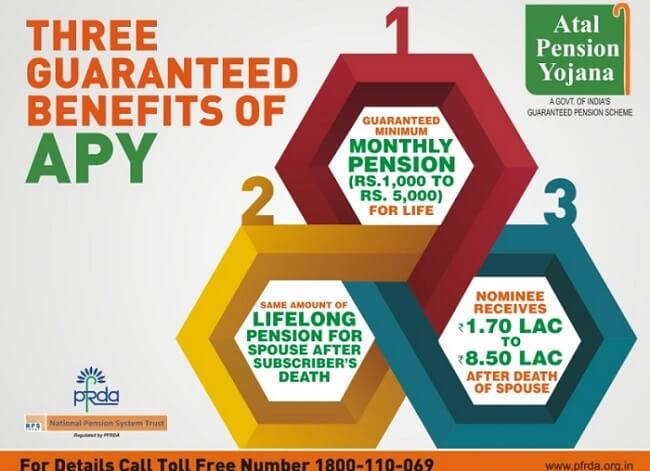 Government of Telangana as a part of its social safety net strategy introduced the Aasara pension on November 2014 with a view to ensure secure and dignified life for all the poor. This scheme is meant to protect the most vulnerable sections of society in particular the old and infirm; people with HIV-AIDS, widows, incapacitated weavers and toddy tappers, who have lost their means of livelihood with growing age, in order to support their day to day minimum needs required to lead a life of dignity and social security.

Government of Andhra Pradesh has introduced the YSR Pension Kanuka scheme with a view to ensure secure and dignified life for all the poor people in Andhra Pradesh. This scheme is meant to protect the most vulnerable sections of society and provide pension to 12 different categories of financialy vulnerable people

The Government of Rajasthan has launched Samajik Suraksha Vridhjan Krishak Samman Pension Scheme for old age small and marginal farmers in Rajasthan. Financial Assistance of INR 750 - 1000 per month will be provided to farmers based on their eligibility.

The Government of Assam has announced Indira Miri Universal Widow Pension Scheme in February 2019. Under this scheme widows up to the age of 45 years will receive a lump sum amount of Rs 25,000 as ‘Immediate Family Assistance’ which will support the family tide over the financial vacuum created by the loss of the bread earner.

In addition to the immediate assistance of Rs. 25,000, for regular maintenance expenses, the widow will also be eligible for a monthly pension of Rs.250 until she attains the age of 60 years, post which, she will be moved to the old age pension scheme.

Government of Bihar has launched a universal old age pension scheme called Mukhyamantri Vridhajan Pension Yojna for all citizen above 60 years of age in Bihar. Mukhyamantri Vridhjan Pension Scheme aims to make all the senior citizens self reliant and to enable them to lead a life of dignity.

The Government of Delhi has launched Vidhwa Pension Yojana on 12th December 2018. Financial assistance of Rs. 2500 per month is provided to beneficiary under this scheme.

Vidhwa Pension Yojana intends to provide social security by way of Financial Assistance to Widows, Divorced, Separated, Abandoned, deserted or Destitute women in the age group of 18 years to lifelong who have no adequate means of subsistence and are poor, needy and vulnerable.

Uttar Pradesh Old Age Pension scheme provides financial assistance of INR 500 to all the citizens who are above 60 years of age in Uttar Pradesh.

Artistes Pension Scheme and Welfare Fund is meant for improving the financial and socio-economic status of the old artistes and scholars who due to old age have to lead a miserable life. The Scheme also envisages to provide medical aid facility to these Artistes and his/her spouse by covering them under a convenient and affordable Health Insurance Scheme of the Government for treatment of diseases involving hospitalization through an identified network of health care providers.

The Government of Madhya Pradesh has introduced Virgo Scheme to provide pension to a couple who only have daughters and they have been married off. This is done so that the government can provide financial security to the couple.