Home |Guides |How to get death certificate in Karnataka? (2022)

How to get death certificate in Karnataka? (2022)

Following are the uses of the Death Certificate.

A Death Certificate is to be provided by the Registrar. The responsibility of the registrar has been assigned to several differently designated officers/officials.

Documents Required for a Death certificate in Karnataka

The process to register Death

The person applying for a death certificate should fill out a form (Form-2 for deaths) at the hospital, which the hospital will then send to the office of the registrar. The Registrar will provide the certificate, which can then be collected at a specified date.

However, death can occur at many places such as

Details of who should inform the Registrar in these cases are mentioned below. 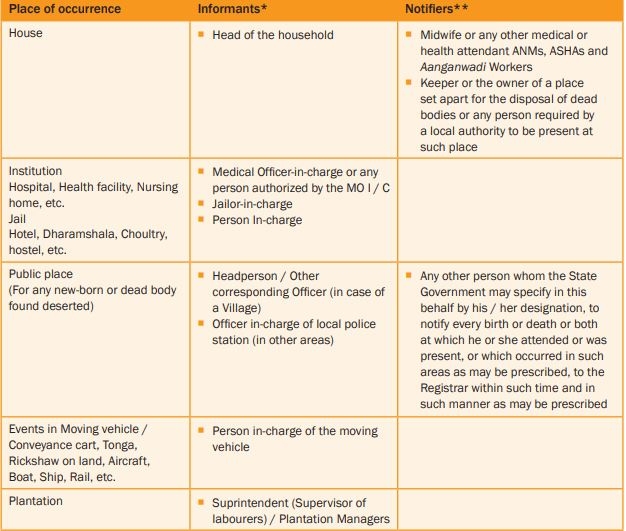 An Informant is an individual who has been designated to report within the prescribed period, the fact of occurrence of death along with certain of its characteristics to the Registrar to register the death. This information is to be provided to the Registrar, either orally or in Form 2: Death Report Form

Notifier is a person who notifies the Registrar in prescribed form and time, every birth or death or both at which she/he attended or was present at or which had occurred in the area under the jurisdiction of the Registrar.

Registration of deaths of missing persons

There are instances, where a person is missing but the family does not have her / his current status i.e. whether the person is alive or dead.

Ordinarily, if the person is missing or unheard, she/he shall be presumed to be dead by the court under Section 107 and 108 of the Indian Evidence Act on expiry of seven years from the date missing and not earlier.

The presumption of death and its date and place of occurrence is a matter of burden of proof. The same may be determined by the competent court/authority on being approached by the plaintiff based on the oral and documentary evidence produced before the court. If the Court does not mention the date of death in its order, the date on which the plaintiff approached the Court would be taken as the date of death.

Registration of deaths in natural calamities and disasters

At the time of natural calamities such as Tsunami, Earthquake, Flood, etc. and disasters such as severe accidents resulting in mass causalities, special arrangements such as the appointment of Sub Registrars with sufficient power for on the spot registration of the deaths and issuance of death certificates will be made.

The period for notifying the occurrence of the death to the Registrar is 21 days from the date of death. For events reported for registration within 21 days of occurrence, a copy of extracts of prescribed particulars from the Death Register will be provided free of charge.

The information on the occurrence of the event can also be reported to you after the expiry of 21 days. Such events fall under the category of delayed registration as under: 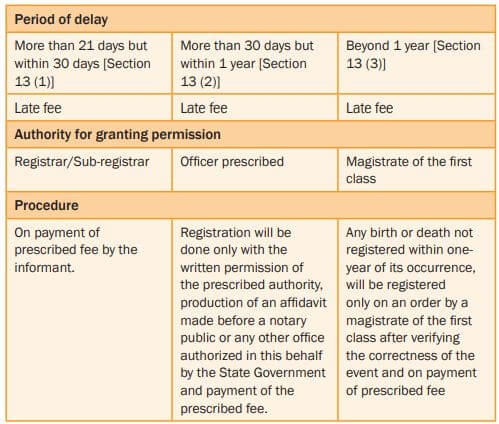 Delayed registration is subjected to payment of a late fee and permission of the prescribed authority.

In case, the death is not already registered at the time of death, the following documents are required to get Death Certificate,

For inclusion of the name of the expired person in the Death Certificate, contact respective Registrars and Sub registrars (Village Accountants and Medical Officers).

For additional Copies of the Death Certificates and any Corrections please contact Data Entry Operators of the concerned Nada Kacheri.

For any clarifications contact the District Statistical Officer of the concerned District.

Follow the below steps to search for a birth certificate online.

Corrections can happen due to clerical error, error in substance or fraudulent errors.

Example: The name of the person was wrongly recorded as ‘Moni’ instead of ‘Munni’. In such case, the Registrar may make necessary corrections in spellings of the name of the person by making a suitable entry in the margin of the death register without any alteration of the original entry after satisfying herself/himself in the matter. The Registrar shall also have to sign the marginal entry and add thereto the date of correction.

Error in form or substance: Error that has a bearing on the identity of the person If any person asserts that any entry in the register of births and deaths is erroneous in substance, the Registrar may correct the entry upon production by that person a declaration setting forth the nature of the error and facts of the case made by two credible persons knowing the facts of the case.

Example: The sex of the person is reported as Male instead of Female. In this case, the Registrar can make corrections to the entry if the applicant produces a declaration as to the error and the facts of the case. Further to it, two credible persons need to declare that they know the facts of the case. The Registrar is supposed to report all corrections along with necessary details to the state Government or the officer specified on this behalf.

Fraudulent or improper entries – Entries made with an ulterior motive. If it is proved to the satisfaction of the Registrar that any entry in the register of births and deaths has been fraudulently or improperly made, she/he will make a report giving necessary details to the officer authorized by the Chief Registrar and on hearing from him/her take necessary action in the matter.